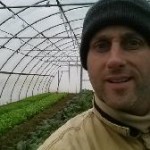 A couple of weeks back, we had some very high winds on the farm. It’s not something that we look forward to. Wind is one of Mother Nature’s most powerful forces and it certainly impacts the farm. While we emerged from last month’s turbulent weather relatively unscathed, it reminded me of an earlier time when we had much more of a problem.

When we first moved onto our farm in Sandwich, one of the first things that we did was build a 3,000 square foot greenhouse. It’s a big building. Within weeks of putting it all together and covering it with greenhouse plastic, we had our first big weather event with high winds. The greenhouse did not fare so well. Within moments, the plastic began flapping violently with the wind. As we stood by, helplessly watching, the wind tore through the plastic, ripping it to shreds. We lost all of our tomato plants that year, although we did manage to get a crop in later on.

This was frustrating, of course, but what could I do? We needed a greenhouse and wind was something that we were going to deal with as long as we were here. We thought of planting tall trees on the windward side of the house but then quickly rejected that idea since it would take about 30 years. I contemplated building a tall fence around the greenhouse but that was financially ill-advised. We mapped out a plan to tie the plastic to the greenhouse frame but then figured the rope’s friction would just wear down the cover faster. Someone suggested that we take the plastic off when we expected high winds. Since putting the plastic on is a major task requiring over 1/2 dozen people and takes about 4 hours, that wouldn’t work either. It was a riddle wrapped in a conundrum.

Then one day I paid a visit to my friend Jeff’s farm. He had a couple of greenhouses that looked like they were in great shape. I watched them from a distance, jealously admiring their strength and sturdiness. After a bit, I shared with him the story behind my wind woes and he asked if the inflator fan broke. To which I replied, exactly,

“did the whatnot to the wherewit do which who now?”

Thus began a quick introduction to the science behind aerodynamics and greenhouses.

You see, inflation fans – which are actually quite small and energy efficient – create a bubble between two layers of greenhouse plastic. By forcing the top and bottom sheets outward, it makes the plastic tight. Tight plastic doesn’t flap in the wind. Since installing our inflator fan, we’ve had no problems at all (except sometimes our solar panels don’t charge the battery enough and the electricity goes out but that’s a story for another day).

This is what makes farming so maddening frustrating and rewarding all at the same time. I don’t come from a farming background and neither does Christina. Often times, we’re left to our own devices to figure out the farm’s challenges. We try our best but sometimes that’s not good enough. On the other hand, we’ve made some fast friends within the farming community of northern Illinois. They’re always glad to help and share their expertise.